Games, life, whatever: a blog from Steve Lawson

Back to the game table

I was just the right age to be part of the first mass success of Dungeons and Dragons. I got the Holmes Basic Set probably for my birthday or Christmas at the end of 1980 when I was ten years old.

D&D consumed my imagination for several years, and I think of myself as having played the game constantly as a kid. But when I really think back, I moved at the end of 1982 across the country. I remember talking about D&D with some of the kids at my new school (with the predictable “oh yeah, I have a level 50 magic user / paladin / assassin, we killed Thor and Zeus” kind of talk) and a non-starter of a game of Traveler with a friend. I think I still read Dragon magazine, but really by November of 1982 I’d stopped playing.

And when I was “playing,” what was I doing? I had two friends who were also D&D players. I think I was always the DM. I was the one who first got the rules and actually enjoyed reading them, so I was kind of the natural DM. I read rules, I made characters, I drew maps and mazes. I bought and read and prepared modules. But I feel like we may have only played a handful of times. I frequently re-visit the blog post, what game were we playing? Like the author, a lot of my “play” time didn’t use any of the D&D rules at all. 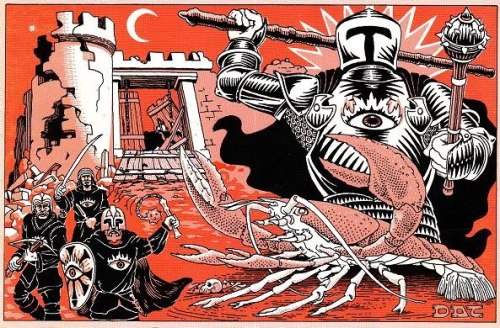 But I do remember giving T1: Village of Hommlet a real try. I don’t remember much about the sessions, and I doubt I had much of a handle on the different factions in the town — you buried a lot of that information, Gary! — but I think my friends and I were taken with the idea that D&D didn’t have to be a dungeon crawl but could involve interacting with NPCs in a more natural way.

About 10 years ago — after more than 25 years away from the game — I started playing D&D and other role playing games with a group of friends. A week ago, I started a game with my wife and another friend of mine, neither of whom had played since they were kids themselves, and my friends’s 14 year old daughter. As one of our first adventures, I’ll be taking them through the Village of Hommlet, which I’ll be updating to 5th edition.